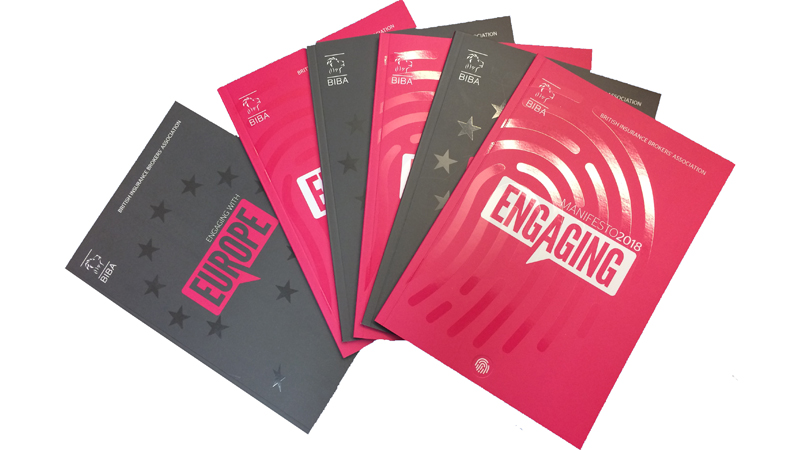 The British Insurance Brokers’ Association (BIBA) has highlighted productivity as a key focus in its 2018 Manifesto, Engaging. It was launched in the Houses of Parliament to an audience of Ministers, MPs, Lords, senior Government officials, insurance professionals and media by the Rt. Hon, Nicky Morgan, MP, Chair of the Treasury Committee on 22 January 2018.

Nicky Morgan said: ““I’m delighted to launch BIBA’s manifesto. Insurance brokers play a crucial role for customers and in the wider economy. I look forward to engaging with BIBA, particularly on the important issues of productivity and the role of regulation.”

BIBA’s Chief Executive, Steve White explained: “Of late, Ministers have been very vocal about how UK productivity lags behind other countries and BIBA is asking for Government and regulators to engage with BIBA to achieve better balance between risk and regulation.

“Research has shown systemic risk does not arise from insurance brokers yet they and their customers are faced with a barrage of new instructions, rules, documentation and missives from one of the most expensive regulators in the world.  These ‘business as usual’ demands have been in addition to the coming challenges of the GDPR, the Insurance Distribution Directive, the Payment Services Directive and Brexit. The sheer weight of red tape and continual changes affect our sector’s productivity, increases frictional costs and hinder service and innovation.”

BIBA is calling for a period of stability in the rate of regulatory change; a global competition objective for the FCA; and a focus on proportionate supervision for its low-risk sector.

In addition, with Insurance Premium Tax (IPT) now at a record high and affecting the affordability of insurance for tens of millions of people and thousands of businesses, BIBA is calling for a freeze on the rate of IPT for the duration of this Parliament.

Looking outwards the 2018 Manifesto is also highlighting engagement with consumers and with businesses.

High on BIBA’s agenda is improving access to insurance including for the near to 16 million people without home insurance cover.  BIBA is part of the Financial Inclusion Commission Reference Group and is calling for wider signposting to suitable insurance brokers to help narrow the insurance gap.

For businesses, and recognising the changing world in which we operate, BIBA is committed to help raise awareness about the terrorism insurance gap and to assist the market in developing suitable solutions including broadening the scope of Pool Re to include non-damage business interruption cover.

Graeme Trudgill, BIBA’s Executive Director added: “BIBA already has a successful established model for helping consumers and businesses access suitable insurance cover thought our Find-A-Broker service which doubled the number of annual enquires in 2017 to 551,300.  We believe the FCA and other stakeholders can do more to broaden signposting, particularly people with medical conditions, to appropriate insurance brokers to help them access insurance.”

The 2018 BIBA Manifesto once again has a separate section dedicated to engaging with Europe about a smooth EU exit. Steve White said: “We are pleased that Government will be legislating to allow many EEA regulated insurers to continue to allow for contracts of insurance for UK clients; but this needs to work both ways and we are calling for a trade agreement that allows for mutual recognition.”

BIBA’s Chairman, Lord Hunt of Wirral, concluded: “BIBA has wide support for its 37 Manifesto calls to action and 19 BIBA commitments on the issues that are impacting general insurance brokers and their customers.  Insurers, trade bodies, charities, Ministers, public bodies and brokers are all quoted in this year’s engaging Manifesto document which sets a clear and constructive agenda for 2018.”

BIBA’s manifestos are driven by issues highlighted by BIBA members as affected them or their customers. Issues are gathered through continual engagement with members via communication, forums, events, and committee and advisory board meetings and in particular during the annual autumn ‘Tour of the Regions which sees CEO, Steve White and Exec Director, Graeme Trudgill visit every BIBA region.

2)            Employment, skills and professionalism – This covers our work with the CII on the classroom to boardroom initiative to encourage school leavers, apprentices, graduates and business leaders to join and remain in our sector. We also have work streams on diversity and inclusion, well-being in the workplace and insurance brokers’ standards and guidance where we are working on sector issues like letters of appointment.

3)            Innovation, disruption, growth and emerging risks – This is about the future of our sector. BIBA is often approached by InsurTech firms wanting to work with brokers and we want to ensure brokers are on the front foot of innovation and disruption.  Also included are the risk-management opportunities arising from the ‘internet of things’ as well as cyber risk and autonomous cars.

4)            Engaging with consumers – BIBA had a record 551,300 enquiries to its Find-A Broker service in the last year. Our agreement on age has seen more than 400,000 older people helped in just over 5 years, so we are keen to extend the reach of this facility and ensure more consumers find their way to a suitable broker. A case study demonstrates of how a broker helped place a difficult risk

5)            Engaging with business – This is the largest ever business section of our Manifesto covering the forthcoming new BIBA business interruption declaration as well as the development of our time limitation notification clause, the terrorisms gap, fire risk, the complexities of notifying a lenders interest in a property, the support on flood resilience from the Floods Minister, Thérèse Coffey; and the Employers Liability Tracing Office.

6)            EU Exit–66% of members responding to our Brexit survey said they had issues over Brexit with 88% of these having passporting issues. The section includes passporting, a new trade agreement, the urgency of a transition deal, motor insurance issues and the importance of the EHIC for travel insurance.

The 2018 BIBA Manifesto can be viewed here