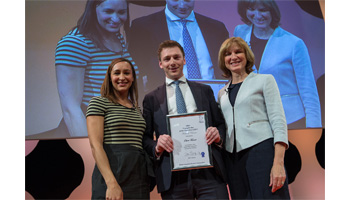 The British Insurance Brokers’ Association has named Oliver Ferrari from Marsh as its national Young Broker of the Year for 2017.

Siobhan Mulvaney of Willis Towers Watson and Samantha Slade of Higos Insurance Services were named as national finalists for the award which recognises the performance of younger brokers and encourages commitment to the future professionalism of insurance broking.

As a result of his commitment to his role Oliver has seen his own career develop as well as becoming an essential addition to the team at Marsh.

The award was presented at the BIBA Conference by Dame Jessica Ennis-Hill, olympic athlete at BIBA 2017.

BIBA Chairman, Lord Hunt of Wirral said: “Oliver is a truly impressive candidate and a deserving winner of the Young Broker award, he has demonstrated that he is capable of identifying and exploiting gaps in the market which has proved beneficial for his firm Marsh.  It is highly likely that Oliver will be a senior figure in the industry in the coming years and his work with the BIBA regional committees as well as winning this Young Broker of the Year award is a positive start to a bright future.”