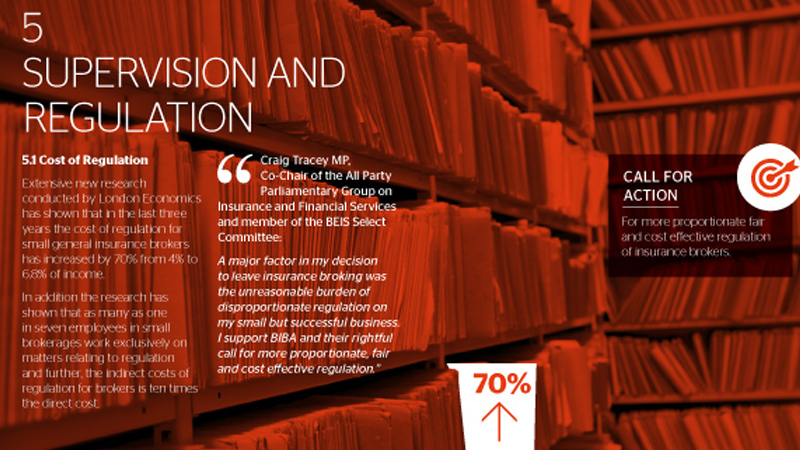 The British Insurance Brokers’ Association (BIBA) has called for the Financial Conduct Authority (FCA) to prioritise cost-effective supervision following a 70% increase in regulation costs for small brokers. Extensive new research, conducted by London Economics has shown that in the last three years the cost of compliance for small general insurance brokers has increased from 4% to 6.8% of income.

The statistics, launched in BIBA’s 2017 Manifesto at the Houses of Parliament, have also shown that as many as one in seven employees in small brokerages effectively work exclusively on matters relating to regulation and further, the indirect costs of regulation for brokers is ten times the direct cost.

Steve White, BIBA’s Chief Executive, said in his address at the Houses of Parliament, that the increase in regulatory cost for small brokers “is a burden on business that must be tackled.”

BIBA is also concerned about the accumulation of regulation highlighting that since the FCA replaced the Financial Services Authority (FSA) in 2013 they have instigated more than 60 consultations, reviews, statements and studies introducing changes to the insurance market.

This accumulation hinders brokers from introducing new customer benefits like MyLicence and Flood Re. BIBA is calling for the FCA to prioritise effective supervision over and above continual change.

David Sparkes, BIBA’s Head of Compliance and Training, added: “The FCA recently outlined its mission, stating that it should be a proportionate and effective regulator.  Our members have told us that this is not the case and we want the FCA to make the most of their mission consultation to address this.”

BIBA is in dialogue with the FCA and will respond to its consultation ‘Our Future Mission’.  BIBA will also raise these issues with the relevant parliamentarians and is working with the All Party Parliamentary Group (APPG) on Insurance and Financial Services.

Craig Tracey MP, Co-Chair of the APPG and member of the BEIS Select Committee, said: “A major factor in my decision to leave insurance broking was the unreasonable burden of disproportionate regulation on my small but successful business. I support BIBA and their rightful call for more proportionate, fair and cost effective regulation.”

In addition, BIBA has called for the FCA to review all current product disclosure requirements and to work with the association and HM Treasury on the implementation of the forthcoming product information document required by the incoming Insurance Distribution Directive. These calls will address BIBA’s concern that existing disclosure requirements are too complicated for many customers to understand and that the FCA and Competition and Markets Authority are overloading customers with far too much technical information.

Regulation remains a key subject within BIBA’s Manifesto with other issues covered including the future funding of the Financial Services Compensation Scheme, a level regulatory playing field with price comparison websites and engaging with the better regulation agenda in the Enterprise Act.
-ENDS-