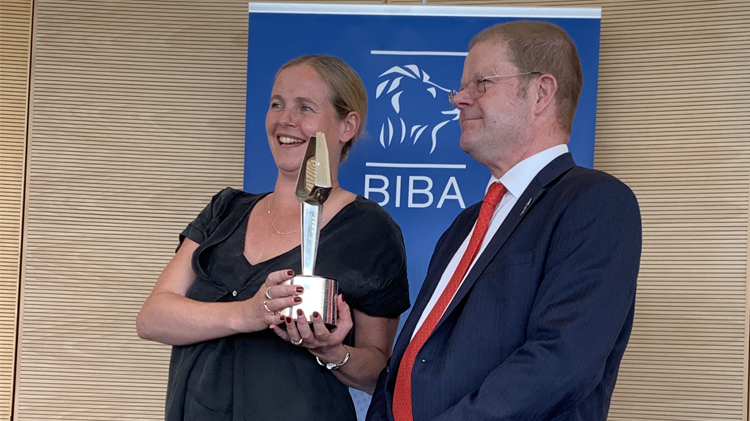 The British Insurance Brokers’ Association (BIBA) has named Esther Shaw as the 2019 BIBA Journalist of the Year.

Steve White, BIBA’s Chief Executive said: “It is 37 years since BIBA held its first journalist awards and this year we added in some new categories to reflect the changing face of the media. We were delighted to see a great number of entries and our panel of independent judges have been, once again, faced with very difficult decisions”.

Steve White, presented Esther Shaw with the BIBA Journalist of the Year Award. He said: “Esther is a very respected and highly successful freelance journalist in the general insurance consumer space.

“Working hard behind the scenes, she is an expert in her field and champions insurance and consumer issues – bridging the gap between the industry and consumers in a fair and balanced way. She is a freelance journalist who has written for many different national publications such as The Sunday Times, The Independent, Observer, the Sun on Sunday and many other financial websites.”

“I would like congratulate Esther, the other winners and everyone who was shortlisted.

BIBA is committed to promoting the work that brokers do in helping businesses and individuals access the insurance protection they need.  BIBA has made awards to journalists for 37 years and this year expanded its categories to reflect the changing nature of financial journalism. As well as entries for news, articles and scoops, the BIBA Journalist and Media Awards include recognition of digital and visual media, campaigns and thought-leadership.  The awards showcase the work that journalists, broadcasters, publications and other influential media providers do to increase the understanding of insurance.

A full list of winners and highly commended journalists from this year’s BIBA Journalist and Media Awards follows:

Judges
The awards are judged independently by the following industry panel: