View all BIBA campaigning issues
Back to top
Find Insurance

Between October 2015 and June 2017 50 million policyholders* including charities and young drivers saw a doubling in Insurance Premium Tax (IPT) through three successive increases to a record high of 12%. The rate remains at this level.

BIBA has made its submission in relation to this month’s Budget calling to freeze IPT.

Members can join the campaign by writing to their MP using this template or by sharing our video.

Businesses and individuals can use our customer template letter to write to MPs if they are unhappy with the increases in IPT.

BIBA’s 2020 Manifesto is also calling on Government to help increase the uptake of telematics policies though a tax break by removing IPT from such policies.

BIBA is reminding Government that the 0.5% increase in IPT applied in 2016 was to be ring-fenced for flood defence and resilience spending.  We are asking that these monies amounting to £250million per annum continue to be spent in this way.

Government reasoned that this level of taxation remains below the rate in other European countries.
However, the UK is in the highest quartile of EU IPT rates and has one of the highest direct cost of regulation for insurance brokers in the world** with some BIBA members paying more than £1M per year in fees. In some
EU countries that have a higher rate of IPT, regulation is funded through general taxation and is
not comparable to the UK model.
IPT is a tax on prudence and is paid for by customers seeking protection through insurance and
is not recoverable by business. We believe any further increase in IPT is contrary to the stated policy of HM Revenue & Customs “that IPT should make the required contribution to UK Government revenue while minimising the effect on the take up of insurance”***
* ABI
** London Economics
*** [HMRC, IPT01300 – Policy objectives]

Case Study - The Impacts of IPT 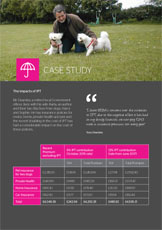 If you need travel insurance and have serious medical conditions find one of our specialist providers.

Whatever type of insurance you need to find, BIBA can connect you with a broker who can help. Please access the online search below or call our Find Insurance Service on 0370 950 1790.